QUESTION 43
Your network contains a single Active Directory forest. The forest contains two sites named Site1 and Site2. You have an Exchange Server 2016 organization. The organization contains two servers in each site. You have a database availability group (DAG) that spans both sites. The file share witness is in Site1. If a power failure occurs at Site1, you plan to mount the databases in Site2. When the power is restored in Site1, you need to prevent the databases from mounting in Site1. What should you do?

A.    Disable AutoReseed for the DAG.
B.    Implement an alternate file share witness.
C.    Configure Datacenter Activation Coordination (DAC) mode.
D.    Force a rediscovery of the network when the power is restored.

QUESTION 44
You have an Exchange Server 2016 organization. The organization contains three Mailbox servers. The servers are configured as shown in the following table.

You have distribution group named Group1. Group1 contains three members. The members are configured as shown in the following table.

You discover that when User1 sends email messages to Group1, all of the messages are delivered to EX02 first. You need to identify why the email messages sent to Group1 are sent to EX02 instead. What should you identify?

QUESTION 45
Your network contains an Active Directory forest that has the site topology shown in the diagram.

You have an Exchange Server 2016 organization. The organization contains three servers. The servers are configured as shown in the following table.

You have the users described as shown in the following table.

You need to ensure that any email messages sent from User1 to User3 are sent to EX02 first, and then delivered to EX03. What should you configure?

QUESTION 46
Your company has an Exchange Server 2016 organization and a Microsoft Office 365 subscription configured in a hybrid deployment. You configure the synchronization of on-premises Active Directory accounts to Office 365. All users connect to email services by using Outlook 2016. You plan to deploy Office 365 Message Encryption for the mailboxes of two executives named Exec1 and Exec2. The mailboxes are hosted in Office 365. You need to recommend which actions must be performed to ensure that all of the email messages sent from Exec1 and Exec2to any recipient on the Internet are encrypted. Which two actions should you recommend? Each correct answer presents part of the solution.

A.    Deploy Microsoft Azure Rights Management (Azure RMS) to the Office 365 subscription.
B.    Deploy Active Directory Rights Management Services (AD RMS) to the network.
C.    Run the Set-MsolUserLicense cmdlet.
D.    From the Office 365 Exchange admin center, create a rule.
E.    Install a certificate on the computer of Exed and the computer of Exec2.
F.    From the on-premises Exchange admin center, create a transport rule.

QUESTION 47
Hotspot Question
You have an Exchange Server 2016 organization. The Active directory sites are configured as shown in the following graphic. 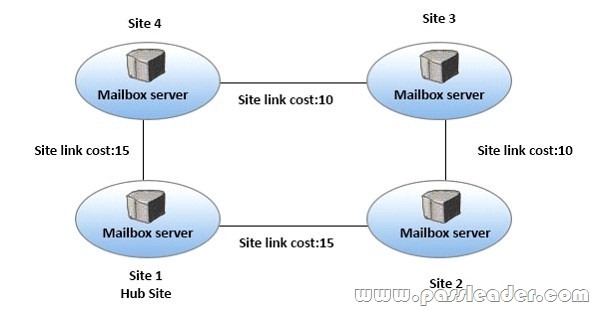 Use the drop-down menus to select the answer choice that completes each statement based on the information presented in the graphic.

QUESTION 48
You have three Hyper-V hosts that each have 20 processor cores and 64 GB of RAM. Nine virtual machines are deployed to the hosts as shown in the following table. 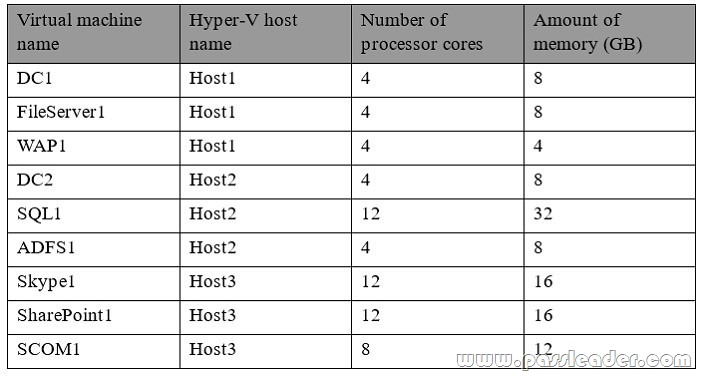 You plan to deploy a two-node Exchange Server 2016 database availability group (DAG) by using the virtual machines. Each node will have 12 processor cores and 24 GB of memory. You are evaluating whether you can use the existing servers for the deployment or whether you must purchase additional servers. You need to recommend where to place the Exchange servers. The solution must minimize costs. What is the best recommendation to achieve the goal? More than one answer choice may achieve the goal. Select the BEST answer.

Answer: B
Explanation:
Use the Test-OutlookWebServices cmdlet to verify the Autodiscover service settings for Microsoft Outlook on a computer running Microsoft Exchange Server that has the Client Access server role installed.

And, DOWNLOAD the newest PassLeader 70-345 PDF dumps from Cloud Storage for free: https://drive.google.com/open?id=0B-ob6L_QjGLpck5vRk5XUVFQb00